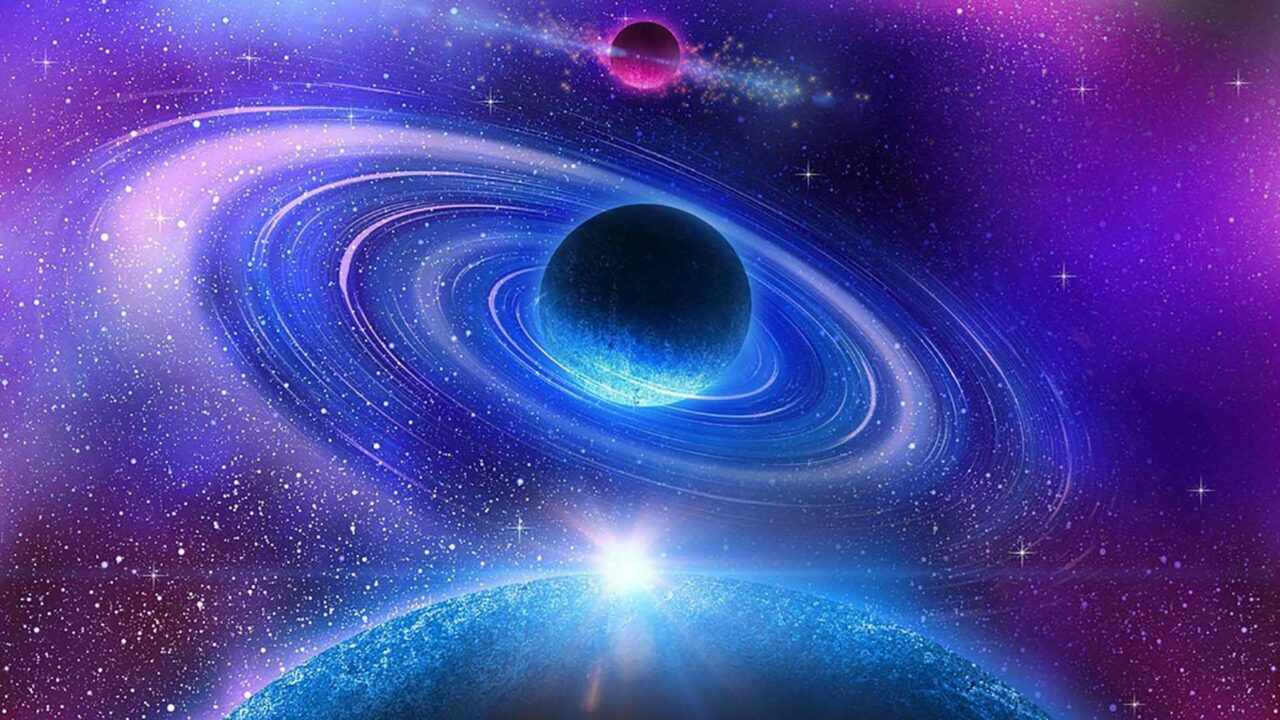 What a week is ahead of us! The key phrase is “major energetic shift”! We have 2 main energy shifts overlapping this week: the nodes of the Moon will be entering Taurus (for the North Node) and Scorpio (for the South Node) – the money, self-worth and power axis – after spending the last 18.5 months in Gemini and Sagittarius (the knowledge/information axis), and Uranus will station direct in and wrap up its five-month retrograde and blaze forward with an innovative-but-practical spirit in Taurus.

But 1st lets us quickly recap what the Nodes of the Moon are. The lunar nodes are determined by the mathematical points (they’re not planets) where the Moon’s orbit crosses the “ecliptic”—the apparent path the Sun makes around the Earth. (We say “apparent” because, in reality, the Earth revolves around the Sun…but from our vantage point on the planet, it appears that the Sun is moving.) The nodes take into account the Sun, the Moon and the Earth. They fall in the same signs that the eclipses happen every year (a regular year has 4 eclipses: 2 lunar and 2 solar ones). The nodes take 18.5 years to go through the entire zodiac. So, the last time the North Node was in Taurus and the South Node in Scorpio was from April 15th, 2003, until December 26th, 2004. If you’re old enough and have a good memory, you can travel back in time and try to remember what was happening in your life during that period.

This electric atmosphere is intensified with the first Full Moon of the year, which will be happening in its own sign of Cancer.

Second, the Moon will be in opposition (tense aspect) with the Sun conjunct Pluto: the planet of crisis, transformation, death and rebirth, other people’s resources, financial institutions, secrets, power and control, par excellence! Did you say secrets, Theodora? Oh yes, I did! If you can be sure of one thing that’ll be all over this Full Moon, it’s the revelation of secrets on a personal and worldwide level, especially when it comes to people in power (corporate and governmental leaders). Why? Apart from the Pluto aspects, the Moon will be in an “out-of-sign” sextile with the North Node in Gemini and the Sun in an “out-of-sign” trine with it, which are both harmonious aspects. What does Gemini rule? Information, communication, the media! Its ruling planet – Mercury – is also currently retrograding in Aquarius, so we’re going to review or reveal details handled by those in power regarding science, innovation, and technology.

All in all, on a mundane level, this Full Moon will translate into worldwide conflictual, even explosive, events steeped into corporate and governmental power struggles focused on finances and influence. On a personal level, Luna will be pushing us to let go of the painful ghosts of the past after a deep introspection and retrospection (with both Mercury and Venus retrograde). This will definitely test our emotional stability, resilience and capacity to adapt to new paradigms, especially when it comes to our careers and long-term goals.

Speaking of power struggles, numerologically, 28° of Cancer reduces to a 10, which can also be reduced to 1. The number “1” is linked to the Sun, Leo and Aries, representing new beginnings and a rebirth of our will and ego. So yes, any conflicts that may arise around this Full Moon will be marked by intense ego clashes. With Venus retrograding in Capricorn, keep your priorities in mind and don’t fall into the trap of dwelling on past wounds. We have enough issues to deal with collectively.

This Full Moon will be most intensely felt by Cancer, Aries, Capricorn, and Libra.

When the celestial co-ruler of Aquarius stations direct, you can expect:

All of which is intensified with the squares (challenging aspects), it’s still making to Saturn and Mercury retrograde in Aquarius! Shocking information, AHA moments, and economic turnarounds are the order of the day!

The Bullpen gets an additional burst of adrenaline from the lunar North Node, heading into Taurus for the first time since December 2004. As I mentioned earlier, the Nodes are karmic points in the sky; the North Node points to an increase in an area ruled by the sign it’s transiting (where we’re headed towards), and the South Node indicates a decrease in the area ruled by the opposite sign (it also relates to the past). For the last 18.5 months, since May 2020, the North Node has been transiting Gemini, the sign ruling our thoughts, perception, learning, day-to-day communication, short-distance travel, immediate environment, information, and siblings. And indeed, we’ve seen an increase in fact-checking and an overflow of data from every possible source, pushing us to question our rigid belief systems (south node in Sagittarius), but we’ve also been falling into the trap of another dark side of Sagittarius: connecting two or three dots and coming up with a conspiracy theory (yes those have been everywhere lately more than ever!). Moreover, because of the governmental restrictions that have been put in place, we’ve been forced to reacquaint ourselves with our cities and nearby towns (Gemini) instead of travelling around the world (Sagittarius).

This energy is ending and switching to a different type of polarity: the Taurus/Scorpio axis. Money, power and sex will be the focus of this next cycle, which wages on until July 17th, 2023. How do we traverse our inner landscapes while also handling material world concerns? We may swing between the extremes of controlled stoicism and unbridled hedonism. There’s a popular saying that we are “spiritual beings having a human experience.” As the earthbound Taurus North Node plays tug-of-war with the mystical Scorpio South Node, we’ll find ourselves seeking the elusive balance between “physical” and “metaphysical.”

What is the nature of this unresolved Scorpoionic karma? Scorpio is, of course, the Scorpion – a creature that makes almost everyone nervous. Death, pain, unexpected catastrophe – there’s the symbolism. In a nutshell, Scorpio refers to just about everything that no one wants to talk about. Between now and July 2023, all of humanity “needs to go there.” We need to face our collective woundedness. The time has come. As a general principle, we can assume that every one of us has been shamed, betrayed, enslaved, raped, pressed into war, or subjected to violence and other violations in prior lifetimes. Those are some of the Scorpionic chickens that are coming home to roost.

Worldwide financial and natural resources will also be at the forefront of this cycle. The decrease/crisis/weakening (South Node in Scorpio) will be seen at the level of banks and financial institutions, debt and taxes, insurance companies, shared resources such as hedge funds, stock markets, inheritances, oil and gas, political control and power, secrets and anything hidden (we’ll be definitely witnessing some powerful revelations). On the other hand, there will be an increase/strengthening in the search for comfort (North Node in Taurus), personal resources such as income, our material values and appreciation for food, art and beauty; with Uranus being in this same sign, expect modern, extravagant and alternative trends hitting these themes (e.g. more booming cryptocurrencies and alternative diets such as veganism).

To take a deeper look at how this energy switch will manifest, we’ll have to take into consideration the position of the ruling planets of Taurus and Scorpio at the moment of this switch. The ruler of Taurus and co-ruler of Scorpio, Venus (retrograde) and Pluto, will be in Capricorn, and the main ruler of Scorpio, Mars, will be in Sagittarius. So, most probably, all of us will get a cosmic push to go back to more traditional values, frugality and learning to live with less. These shifts will be internationally (Mars in Sagittarius) orchestrated by governments and big corporations (Capricorn). This could also translate into inflation hitting all Taurian resources, especially food, which we’ve already been seeing with the Saturn/Uranus square. The same goes for any big changes hitting all the previously mentioned institutions ruled by Scorpio; restrictions in taxes, loans, insurance, inheritances etc., will be regulated by governments as well.

The transit of Uranus and the Nodes in Taurus and Scorpio will impact Taurus, Scorpio, Leo and Aquarius the most.

This gem uncovering will peak on January 23rd when Mercury retrograde and the Sun will make an exact conjunction in Aquarius! Get ready for an inflow of innovative and unusual ideas hitting your mind! Don’t act too fast on them, though! We’re in a Mercury retrograde, remember? Once Mercury goes Direct on February 4th, if you still find your ideas worthwhile, take your leap of faith!

Again, Aquarius, Taurus, Leo and Scorpio will be inspired the most by the highly intellectual Aquarian energy!

This bittersweet week calls for playing your favourite music and being taken away for a few days by nostalgia!

“When I feel blue in the night
And I need you to hold me tight
Whenever I want you, all I have to do is
Dream”.