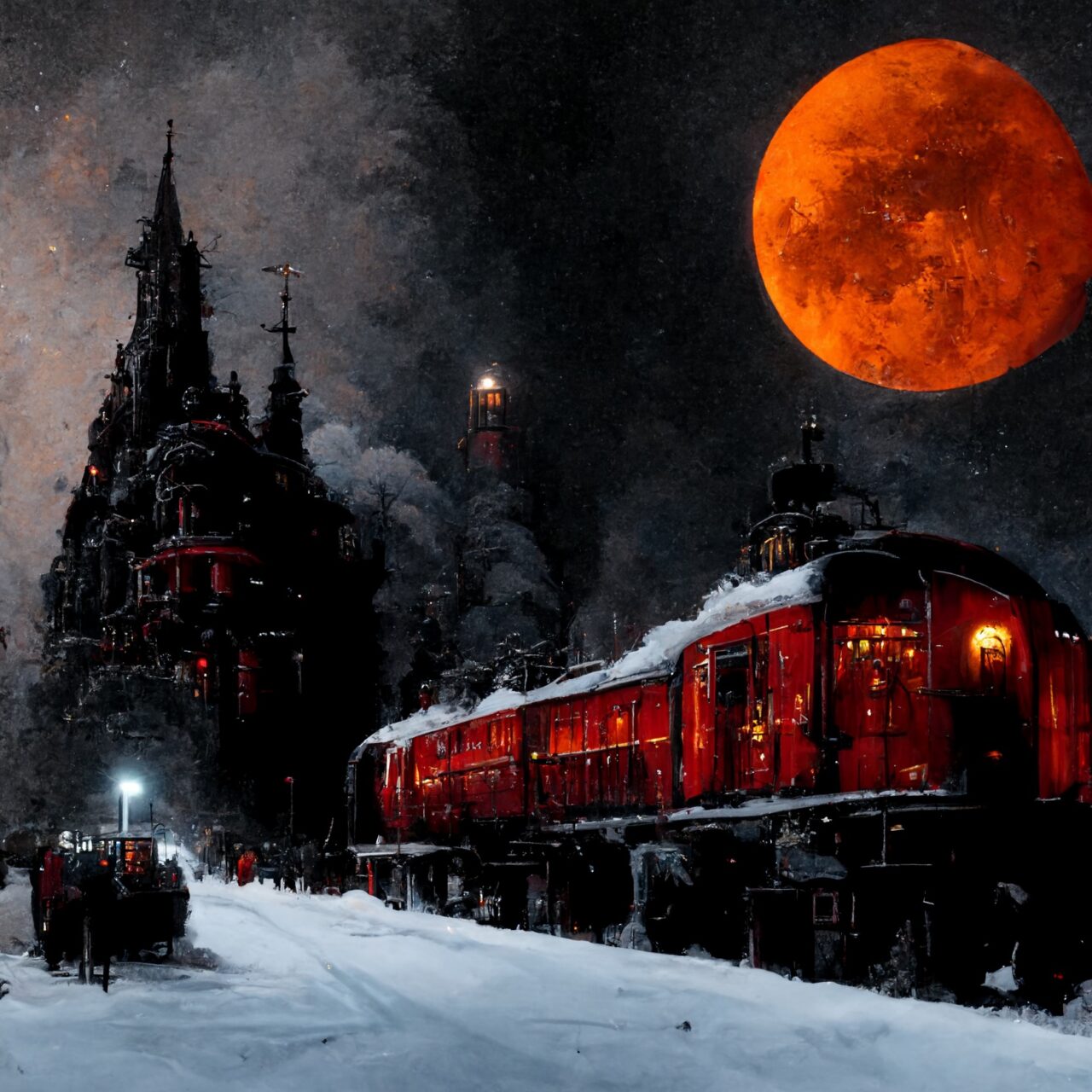 We’ve made it to the end of eclipse season (and the last eclipse for 2022)! Just hold on tight for one more week! There are many astrological alignments to cover in this weekly horoscope. Still, the most important one to which the rest are tied is the chaotic and disruptive Full Moon Lunar Eclipse in Taurus! Taurus is a fixed earth sign; it represents the peak of spring, grows and sustains things, and rules our values, environment, self-worth, talents, and personal finances.

The Head of the Dragon is a vessel of good Karma; it’s like a heavenly savings account, where all the good deeds you have done in the last 19 years are kept safe for you to use now that the North Node is in the sign of the Holy Cow. The currency you can withdraw from this saving account is Taurus related—art, talent, money, pleasure, comfort, security, sensuality, self-love, and connection to the environment. It is recommended to take a trip down memory lane and see if any talents or new ways of making money came to the foreground the last time the North Node was in Taurus (more precisely, we had a similar total lunar eclipse in Taurus on November 9th, 2003).

The Tarot card for Taurus is the Hierophant, the interpreter of dreams and the keeper of tradition. He is our spiritual guide, the Rabbi, Mullah, Lama, or Shaman. As you can see, getting down to the business of enlightenment needs a good old Earth sign. However, with Uranus conjunct the North Node, tradition (and our Earth) is being shaken up and reviewed, so expect the unexpected!

Messages, messages, and more messages! Hermes, the messenger of the Gods (also known as Mercury), meets the Scorpio Sun in an exact superior conjunction (called Cazimi) this Monday, November 7th! Archetypally and mythologically, this is when Zeus proclaims Hermes a herald to Hades capable of crossing the border between the living and the dead. This is when Mercury descends into the underworld (which is enhanced with the conjunction happening literally in the sign ruling transformation and the underworld!) before it rises as an Evening Star (on December 13th, 2022).

This transit will support Scorpio, Cancer, Pisces, Capricorn, and Virgo the most.

This Tuesday, November 8th, a supercharged total lunar eclipse in 16° of Taurus will occur at 12:02 PM (CET)! A lunar eclipse is a Full Moon on steroids bringing dramatic, fated and unexpected endings and/or culminations that directly impact us individually and collectively – over the next six months – contrary to a solar eclipse that concerns more directly world leaders and people in power in general.

Astronomically, the interference from the Earth, blocking the stream of light from the Sun to the Moon, makes this a remarkable time, unlike any other Full Moon event during the year. The Earth acts as nature’s circuit breaker, bringing an overflow of energy back down to Earth. This notion becomes all too clear in the presence of a cataclysmic event, often a reaction to the magnetic shift during a Lunar Eclipse. We can understand this energy using the image of a quiet, peaceful town engaged in routine activities when disrupted by a tornado, activated volcano or hurricane.

The symbolism of the interference is that of an unexpected complication resulting from the emergence of another body (as represented by the Earth), intercepting the continuous flow of events intended by the originator. The interception produces an altered version of conditions, manipulated by things or those outside the realm of its origin. Circumstances “beyond your wildest dreams” come to mind, although the events around a Lunar Eclipse often go unnoticed. It may seem common to have breakdowns and disruptions that lead you to a turning point.

The impact of a Lunar Eclipse can disrupt our personal lives by turning them upside down and inside out with like births, deaths, marriages, and divorces. You may experience the impact of a lunar eclipse as a time of more emotional pressure and a sense of ending or urgency. Often there is a need to surrender or let go, a principle associated with Pluto’s symbolism. There are things you have never thought of that take on a momentum beyond your control. This often makes this time particularly stressful for personal relationships. The issues of personal relationships have a natural tendency to sort themselves out during a Lunar Eclipse season, often bringing old matters to a head. You may experience ending a period of independence with marriage or regaining your freedom through a divorce. It may simply mean you are managing your relationships totally differently.

But, since this Lunar Eclipse is with the North Node (looking ahead into our future), whatever ending you’re experiencing is meant to uplevel you.

It sounds a bit nebulous, but I’d rather say it’s related to truth and secrecy. The Sun in Scorpio and the Moon and Taurus deal with the basic foundations of life, with things like food and security. So, Taurus deals with the literal foundations of life and values like food, finance, and energy…  And Scorpio deals with the more internal extremes of intimacy/sex, trust, and very intense and deep emotions; it also rules power and politics in general (you might have already encountered the term “Plutocracy”).

So when there’s a lunar eclipse regarding these things, this suggests a significant disruption (especially with unpredictable Uranus involved) in the foundations of life and their meaning to our supply lines. Amid an election, it looks like there will not be a trusted outcome, even though Taurus is a traditional fixed earth sign, as we mentioned earlier, indicating a potential win for the Republican Party in the U.S.

The Moon will be in the second decan of its exaltation sign of Taurus (the second-best position for the Moon), alongside Uranus retrograde and the North Node. The second decan of Taurus is associated with the “6 of pentacles” Tarot card (also known as “the Lord of Success”) ruled by the Moon, making this lunar eclipse even more emotionally supercharged. It’s a generous kind of energy or relatively equitable: our internal environment brought forth a pretty supportive external environment. However, in reverse, it shows an imbalance in your priorities so that you won’t be satisfied with the outcome.

The Sun, Mercury, Venus, and the South Node (making this a super concentrated energy called “a stellium”) are in the second decan of Scorpio, associated with the “6 of cups” Tarot card (also known as “the Lord of Pleasure”) ruled by the Sun. With the Sun in that part of the sky, it shows that leaders, authority figures, and those in power and charge of this chaotic event could end up miserable; the typical “it’s lonely at the top” kind of scenario. It’s also a positive card related to soulmates and nostalgia; it shows being social and appreciative. But when reversed, it indicates mystery and being very upset when surrounded by abundance.

This Full Moon is exactly conjunct Uranus retrograde by degree, and not only it’s eclipsed, but it also occults (hides/eclipses) Uranus (such double occultations happen 1 to 2 times in a century max!), bringing in even more chaotic and disruptive energy than in the case of a simple conjunction. Taurus is an Earth sign; this can translate into extreme natural disasters such as earthquakes, thunderstorms, hurricanes, plane crashes, or even tsunamis (with the Moon and Uranus being in the decan and degree (16°) ruled by the Moon and Cancer (water)).

Furthermore, this lunar eclipse is challenging because it creates a T-square (a very charged and challenging configuration) with the Moon and Uranus on one side, Sun, Mercury and Venus on the other, and Saturn on the apex (making it the strongest planet – ruling rules, limitations, and conservatism – in the configuration and is reinforced even further by a trine from Mars retrograde in Gemini)! A culmination of the financial/economic crisis is very much possible with this eclipse activating the Saturn/Uranus closing square.

On a personal level, this is a game-changing lunar eclipse; it brings epic opportunities to shift (and increase!) the way you save, spend and earn. Ready to do away with a longtime bad habit and start fresh? Here’s where the sensible-yet-sensual Taurus moon can save the day, reminding you that actual change is a marathon, not a sprint. That said, this is a rare total lunar eclipse, and it could serve up a promising possibility that you need to decide on…fast! Don’t stall if you’re excited about exploring something that shows up today (or over the next few days). This may indeed be a “once in a lifetime” gift, like a chance to travel for work or collaborate with a dream client you’ve followed for years. Jump into research mode and see what it will take not to miss out. Practical magic is plentiful today, but you must take action to tap into it.

The last time we had a similar lunar eclipse in Taurus was almost on the same date: November 9th, 2003. You can go back in time and think about what was going on in your life during that period. The current eclipse’s situations will most likely be similar (they’re never the same, though).

Here are some of the critical world events that coincided with the 2003 Total Lunar Eclipse in 16° of Taurus:

As you can see, the main themes revolved around war conflicts, political alliances, and nuclear power, natural disasters, and sex issues, all of which are ruled by both Taurus and Scorpio.

Finally, this eclipse will be visible in most of North America (U.S. and Canada), Beijing, Tokyo, and Seoul. Naturally, the geographical areas from which the eclipse is visible will be affected the most by it.

Taurus, Scorpio, Leo, and Aquarius will feel this eclipse most intensely. Especially those of you who have your Sun, Moon, Ascendant, Descendant, Midheaven, IC or any other important planet or point in your chart around 16° of these signs (give or take 2-3 degrees).

Despite all of this intensity, we end the week with a series of benevolent and supportive aspects are taking place in the water element (emotions, family, healing, imagination, dreams) between Athena (wisdom) in Cancer (family), Venus (finance) and Mercury (communication) in Scorpio (transformation), and Neptune (mysticism) with Jupiter (expansion) in Pisces (empathy). Imagination, healing, intuition, poetry, meditation, dreams, empathy, the birth of ideas, and new relationships are signalled. More than anything, it gives protection to those willing to be brave enough to feel. The peak of this positive flow is November 13th, when the Moon in Cancer activates the trines.

The water signs Cancer, Scorpio, and Pisces are particularly supported by this configuration.

Bear in mind that this is a general horoscope and is in no way your personal horoscope. If you’d like to know what your birth chart says about your personality and your life’s purpose or discover what the upcoming astrological alignments mean specifically for you, you can:

(i) book a LIVE consultation with me;
(ii) order a PRE-RECORDED reading;
(iii) or purchase one of the newly added mini readings that will answer your most pressing Astro questions within 5 days max!